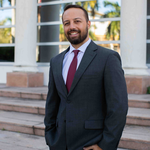 I am a  New Jersey native, from Long Beach Island, NJ.  I attended Towson University, where I obtained a Bachelor of Science in Political Science, graduating with honors. While attending Towson, I pursued my passion for sports by playing on the Towson Ice Hockey Team.  I moved to South Florida in 2007 to attend Nova Southeastern Shepard Broad Law School, where I obtained a Juris Doctor, cum laude. During law school, I was a member of Law Review and I was a Merit Scholarship recipient.  In my second year of law school, I received an award for the highest grade in Constitutional Law II.

During law school, I had the pleasure of interning for the Attorney General's Office of Florida, Economic Crimes Division.  While there, I gained valuable experience in areas relating to economic fraud and fair and deceptive trade practices.

I am licensed to practice law in both Florida and New Jersey. I have also worked as an associate at an insurance defense firm, whose primary client was one of the largest auto insurance companies in the country.  It was here where I witnessed insurance companies prioritizing money over people. This is what motivated me to pursue personal injury law. Insurance companies should be held accountable when they attempt to lowball people who have been injured in accidents.